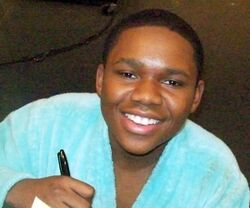 Larramie Cortez "Doc" Shaw is an American actor, singer and rapper. He is best known for playing Malik Payne in Tyler Perry's House of Payne, for which he won a Young Artist Award in 2009 for best supporting performance in a TV series. Shaw is also well known for his roles as Marcus Little in The Suite Life on Deck and King Boomer in Pair of Kings.

Shaw began starring in television commercials before appearing in the show House of Payne. In 2006 when he earned the role of Malik Payne on the TBS sitcom, Tyler Perry's House of Payne. Shaw's character, Malik, is a witty teenage boy whose antics often get him in unintentional trouble. He was a presenter at the 39th annual NAACP Image Awards ceremony in 2008. He joined the cast of Disney Channel sitcom The Suite Life on Deck for the show's second season which began airing on August 7, 2009. He played Marcus Little, a former Grammy Award winner whose career ended after his record label dumped him. On August 20, 2010, Shaw made his final appearance in The Suite Life on Deck. Shaw next appeared on Pair of Kings with Mitchel Musso from Hannah Montana. Shaw made his singing and rapping debut on the Pair of Kings theme song, "Top of the World", also performed by Musso. The song was featured on Radio Disney on September 10, 2010. Pair of Kings airs on Disney XD.

Retrieved from "https://pairofkingspedia.fandom.com/wiki/Doc_Shaw?oldid=19412"
Community content is available under CC-BY-SA unless otherwise noted.