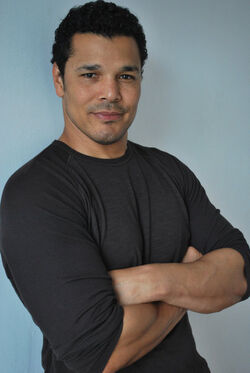 Geno Segers is a voice, stage and television actor best known for his role as Mason Makoola in the Disney XD television series Pair of Kings. Segers also guest starred in Zeke and Luther.

Segers was a footballer, wrestler, and track athlete in high school and college. He played football at Western Carolina University, after which he played in the American National Rugby League. From there, he moved to New Zealand to play for the Richmond Rovers rugby league team.

At the suggestion of a friend, he auditioned for voice ads at a New Zealand radio station. His voice (Segers is a bass) earned him a lot of attention, and caught the attention of an agent that lead Segers to be cast as Mufasa in the Australian production of The Lion King. He went on to star in the American and Chinese productions as well.

Unhappy with the lack of leading roles for basses, Segers returned to New Zealand, where he got a request to send in a reel for Pair of Kings. They wanted someone who "spoke like James Earl Jones but looked like The Rock." Segers landed the role of Mason Makoola, the guard of twin kings Brady and Boomer on a Polynesian island called Kinkow. He also hosts Fort Boyard: Ultimate Challenge along with Laura Hamilton.

Retrieved from "https://pairofkingspedia.fandom.com/wiki/Geno_Segers?oldid=16738"
Community content is available under CC-BY-SA unless otherwise noted.