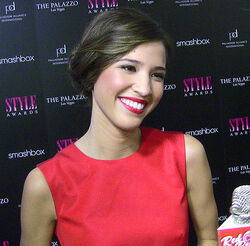 After gaining experience in community theatre she got her first television role in 2005; she played the recurring role of Gigi Silveri on One Tree Hill appearing on the show until 2009. She also co-starred in Disney Channel original film, Den Brother. As of 2010 Chow co-stars as Mikayla in Disney XD original series, Pair of Kings.

Chow was born in Columbia, South Carolina on September 9, 1991. She is of Chinese and Caucasian descent. She has two younger siblings, a brother who is two years younger and a sister who is eight years younger. Chow currently attends Columbia University in New York City.

Retrieved from "https://pairofkingspedia.fandom.com/wiki/Kelsey_Chow?oldid=22309"
Community content is available under CC-BY-SA unless otherwise noted.