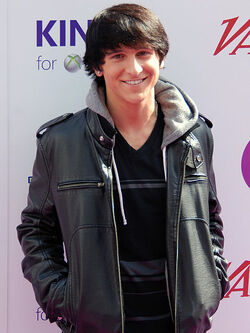 Mitchel Tate Musso (born July 9, 1991) is an American actor, singer-songwriter and musician. Musso is best known for his three Disney Channel roles as Oliver Oken in the Disney Channel sitcom, Hannah Montana, Jeremy Johnson in the Disney Channel animated series Phineas and Ferb and his role as King Brady in the Disney XD series Pair of Kings. He is also the host of Disney Channel's latest reality series, PrankStars. In some of his other works, he provided his voice of DJ for the computer animated/motion capture film, Monster House and also starred as Raymond Figg in the Disney Channel Original Movie, Life Is Ruff, released in 2005. Musso's self-titled debut album was released on June 2, 2009. The album debuted at number 19 on the Billboard 200.

Musso was born in Garland, Texas, the son of Katherine and Samuel Musso, who were involved in community theater in Dallas, Texas. He has two siblings – Mason Musso, who sings lead vocals in the band Metro Station, and Marc Musso, an actor. Musso is of part Italian descent. He had a golden labrador named Stitch which died in November 2012

In 2004, Mitchel made his Hollywood film debut in Secondhand Lions, alongside his brother Marc. Before Musso was cast in Secondhand Lions, he had been in several films beforehand: Am I Cursed? as Richie and The Keyman as a cub scout both in 2002. Musso also starred in three episodes of King of the Hill as the voice of Bobby Hill's friend Curt in the episodes "The Powder Puff Boys" and "Bobby Rae" as well as the surfer kid in "Four Wave Intersection" in 2007. {C In addition to his role as Oliver Oken in Disney Channel's Hannah Montana, Musso also voices Jeremy Johnson in Phineas and Ferb, a boy whom Phineas's sister, Candace (Ashley Tisdale) has a crush on. Other acting credits include Raymond Figg in the Disney Channel Original Movie, Life Is Ruff, the voice of Aang in the unaired version of the pilot episode of Avatar: The Last Airbender, the voice of DJ in the film, Monster House, and Hannah Montana: The Movie, which was released on April 10, 2009. Musso was in the first Disney Channel Games in 2006 on the Green Team, and appeared on the Red Team in 2007 and 2008. He also appeared in the TV movie Walker, Texas Ranger: Trial by Fire alongside Chuck Norris and Selena Gomez. On June 2, 2008, Musso was a surprise guest at the Spotlight Awards at the North Shore Music Theatre in Beverly, Massachusetts. He presented awards to the Best Actor and Best Actress of the 2007–2008 theatrical year. In 2008 Musso, Miley Cyrus and Billy Ray Cyrus all made "family" guest appearances in Metro Station's music video for Seventeen Forever. In late 2009, Musso was cast, along side The Suite Life on Deck and House of Payne's Doc Shaw, in a new television series for Disney XD titled Pair of Kings. The series began production in March 2010, following the production of the final season of Hannah Montana in which Musso does not star in this season he will only be a guest. The series premiered on September 10, 2010. It was announced that Musso would be the host of Disney Channel's latest hidden camera reality series, PrankStars, which will premiere on July 15, 2011. Mitchel left Pair of Kings in 2011.

Musso performing at the Taste of Chicago 2009, Chicago Musso sang a remixed remake of the song "Lean on Me" for the Disney film, Snow Buddies; the music video is included on the DVD and the song is included on the Radio Disney Jams, Vol. 10 CD. Musso also sang the song "If I Didn't Have You" with Hannah Montana co-star Emily Osment for the DisneyMania 6 CD in 2008 and sang the song Stand Out for the Disneymania 7 CD in 2010. For their 2009 Disney Channel Original Movie, Hatching Pete, Musso teamed up with co-star Tiffany Thornton, from Sonny with a Chance, to record a song called "Let It Go" that was used in the film. The two also worked on a music video for the song which was released to Disney Channel. Musso also recorded a song called "The Girl Can't Help It" for another Disney Channel Original Movie, Princess Protection Program. "Let it Go" and "The Girl Can't Help It" was featured on the Disney compilation album, Disney Channel Playlist, which was released on June 23, 2008. And sang "Live Like Kings" on Disney XD's Pair of Kings {C In a studio effort, Musso released his self-titled debut album on June 2, 2009. His debut single, "The In Crowd," a cover of a John Hampson song, premiered on Radio Disney on December 5, 2008. The song is also featured on Radio Disney Jams, Vol. 11. His second single, "Hey", was released on May 15, 2009 on Radio Disney with an accompanying music video that premiered on Disney Channel. {C In July and August 2009, Musso opened for Metro Station. He also launched a headlining tour in August, with KSM, as his opening act. The tour concluded September 24 in New Orleans, Louisiana. On Saturday, September 4, 2010 he put on a free concert at the Great New York State Fair's Chevy Court. One week later he put on another free show at the Utah State Fair. Musso's second release, Brainstorm was released on November 23, 2010. He made a video for each one of his songs on the album to "Tell the whole story." His song Celebrate was in the radio disney Top 3. 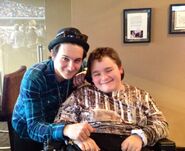 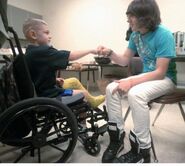 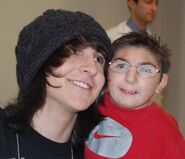 Add a photo to this gallery
Retrieved from "https://pairofkingspedia.fandom.com/wiki/Mitchel_Musso?oldid=23562"
Community content is available under CC-BY-SA unless otherwise noted.