Start a Wiki
Season One 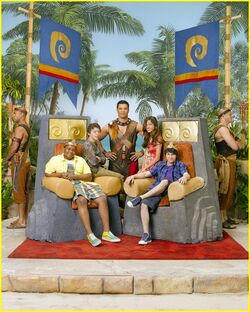 Season
Episodes
One
20
Aired
September 10, 2010 - May 2, 2011
Premiere
Return of the Kings
Finale
Journey to the Center of Mt. Spew
Starring
Mitchel Musso as Brady Parker

The series centers on brothers Brady (Mitchel Musso) and Boomer (Doc Shaw), a pair of 16-year-old twins raised by their aunt and uncle in Chicago who live a normal existence. However, when Mason (Geno Segers), the royal adviser to the throne of the island of Kinkow, arrives at their high school, they learn that they are the heirs to the throne of the island, and after Mason tells Brady and Boomer of their lineage, they begin to realize that their lives are about to change dramatically.

After making the discovery, the brothers relocate to Kinkow, an island to assume their roles as the joint kings of the island nation, which has many odd customs and superstitions – while trying not to cause problems. Actually, the oldest twin was supposed to rule alone but, since all records of which twin (Brady or Boomer) is the eldest were lost, the two of them must rule together. Boomer and Brady's efforts are often aided by Mason's teenage daughter Mikayla (Kelsey Chow) and hindered by Lanny (Ryan Ochoa), a disgruntled cousin who's out to sabotage the boys and take the throne for himself, because he was supposed to be heir to the throne before they found out of Brady and Boomer.

Retrieved from "https://pairofkingspedia.fandom.com/wiki/Season_One?oldid=23935"
Community content is available under CC-BY-SA unless otherwise noted.